Ok so admittedly – I went in expecting adventure, finnpoerey friendship, a lot of pew pew pew and lightsaber sound effects – and I got exactly what I wanted. First impressions, TROS is great.

It’s beautiful. The CGI is breathtaking and just so colorful and saturated. They also reflect the mood / atmosphere really well – like the feeling of kinda Indiana Jones like adventure in the desert, the emotional ups and downs of the huge waves, exagull’s funky planet look with the huge towering block one person’s length above the ground. Very funky, very interesting. The environments and aliens and droid designs were all interesting – the new cone robot boy D-0, Babu Frik, so cute, so wholesome.

Music – also A+. Gorgeous sound design, felt like an orchestra was right there. Everything is timed to the music, every emotional cue prompted by song. The theme songs were great, excellently used. John Williams is of course well attuned with film score writing, so even if he does seem to “borrow” a lot of elements it’s great, or I guess maybe it’s because he borrows familiar tunes that powers the whole connotation of his music? Either way, good score, well edited as far as music and film as a duo work.

FinnReyPoe is a ship that is sailing – a lot more moments for the trio in this film than in the last two. It was sorely needed and sorely missed and I’m so glad to have more. So many three way hugs, Poe getting the general position and immediately looking for Finn to tell him he needs him and Finn doesn’t even bat an eye and just goes with it, Finn knowing exactly what blaster maneovre Poe wants him to use… The list goes on. Of course, now that i’ve listed everything down, I realise Rey didn’t really have a lot of scenes with the trio which is one of my gripes about the film – but i’ll leave that for a little later.

For now, I want to celebrate what was good.

Adam Driver, sweet sweet Adam Driver. As a lot of people on Tumblr point out, his mannerisms as Ren and then as Ben were so clean, clear and distinct. As evil murderer Kylo Ren, he is stiff and constantly on alert, as not so evil but still murderer Ben, he is relaxed, sassy and just kinda like his dad. And oh that sweet moment when he and Rey  kissed and he had that huge grin on his face – sweet sweet Adam Driver.

So good. So sweet.

The movie also felt like a callback to KOTOR – i’m not too sure if it was in a good or bad way. The bad guys having unlimited ships and stuff was essentially the Star forge, minus the star forge.

Okay so I don’t want to say that’s all I enjoyed in the movies – but it kinda is. At least, I think it is, because nothing else pops to mind for now. I guess I’ll add more as I go. But notice anything weird? I didn’t really talk much about Rey. There’s a big reason for that.

Namely, I just didn’t enjoy her character arc this movie.

Previously, she’s been portrayed as this badass scavenger woman who don’t need no man – she’s independent, fierce, loyal and so kind. She’s an amazing pilot, amazing fighter and amazing person. So why the heck is she so bland in this movie??

She has very little opportunity to shine, personality wise. She’s suddenly a mary sue – want to heal a giant worm monster? done. want to destroy these 5 random dudes? done. want to move this entire freaking spaceship????? done. These are powers that are cool and make for great CGI effects and epic moments. But the fact of the matter is Rey had not much guidance going into this adventure.

Leia was training her, yes, but Rey barely finished that weak ass obstacle course at the start. So how the heck did she accomplish everything she did on her own like that?? And my understanding of the force is that it isn’t like mana that’s innate right? It’s everywhere, it’s just how you use it – so you can’t even explain it by saying she has a lot of chakra that’s why. Cuz it’s not! It’s about control and balance and feeling the force and channelling it. If she couldn’t do it before, what makes anyone think she could do it now, given that she has done absolutely no training between the first and last scene.

Rey was really getting on my nerves for the first part of the movie too. I already really hate the well worn concept of a person with villain blood getting convinced they should be a villain too even though they’ve spent a good part of their life doing good. Just because you have the Palpatine surname, doesn’t mean your entire life time of doing good is erased. I get that her whole thing was that she tried to do all these thing, move the freaking ship and instead she blasts it out of the sky and thinks she’s killed chewie. But still, it’s frustrating. I really don’t like this trope. I understand where JJ Abrams is coming from with this one but man does it remind me of Korra – and I hated Korra.

The whole thing about Rey doing everything alone also pissed me the heck off. I get that she’s now a cool jedi and the force tm tells her things and shows her visions and her soulmate ben solo keeps distracting her, but how irresponsible must you be to consistently leave your friends hanging out in danger? I don’t really remember the previous movies anymore, but I do know that I wasn’t as irritated then as I am now, so most likely she had at least a modicum of responsibility.

The final battle with Palpatine also irritated the heck out of me. When Ben Solo comes in hot and they do the whole pass a lightsaber via the force thing, that was very epic. (The fight was not as epic – the entire knights of Ren sucked absolute ass, didn’t do anything but that’s a different story) And when Ben and Rey fought side by side – oo chills. Gave me a lot of hope that they’d do it together because the whole movie, I was hoping for a scene where stupid Rey goes and tries to do things on her own, but her friends are there to defeat Palpatine together!! But of course not.

Ben gets shoved into a giant crevice and by the time he climbs out Rey has done everything without him. An absolute waste.

TLJ was about how you don’t have to have hero’s blood, you can be a nobody and still fight for your beliefs. I get that finn and poe have to be handling ships but I feel it’s such a sorely missed opportunity for them to fight together side by side. No more of this going alone nonsense. I really dislike that trope.

Another thing is that the whole movie just has wack pacing. Biggest example that I can think of now is when Ben Solo dies. That shit wack. He literally kissed her, smiled then boom down he goes. I knowww, it’s dramatic to have the whole scene play out like Rey carrying Ben in her arms, crying, etc. But it’s star wars?? When else will you have over the top drama?

And also like a lot of people mentioned, Kylo Ren is an objectively terrible person. He’s manipulative, destructive and was an absolute dick to Rey. I couldn’t feel any romantic connections between them, although I know a lot of people did. I just feel they would have been much better as something like a brother/sister vibe. Letting Ren and Rey get together at the end is just giving the okay for someone to be a big jerk and still get the girl. Not really a good message. A more familial bond would’ve been stronger, because that’s what Star Wars is about – plus not every movie needs the romance subplot. Especially because there wasn’t in this movie??? They didn’t even hang out much other than to fight.

Also sorry if you can just force heal a person alive, there’s so many things that could have been done with this power. Why didn’t anyone do it. Why didn’t Anakin rise Padme from the dead?? Why didn’t Leia just force heal Han Solo or something? (ok that’s reaching a little) but still….. You can’t just write convenient abilities and pretend it works…

Oof and the way they treated some of the characters. Big wack. They shoved Rose to one side, poor girl deserved so much better. Even if you want to retconn the whole RoseFinn kiss, you could’ve still given her more lines and more character and a more interesting job than to be the one to tell Poe Finn didn’t make it. How stupid is that? Kelly Marie Tran really truly deserves more than this franchise has ever given her.

General Hux as well. His character has always been interesting and weird. The typical coward in power type but he has this kind of comedic relief atmosphere around him that’s really good in such a tension filled movie. He already got Finn to shoot him in the arm (Finn shoots him in the leg) and still he gets killed off in such a disrespectful way – just a blast to the chest. I get the shock value of it but dang did you have to do that. He’s a spy and the only reason he’s a spy is to spite Ren, how great is that??

In general, I think I am getting influenced by the post-movie discourse, but one tweet I saw says it best I think. 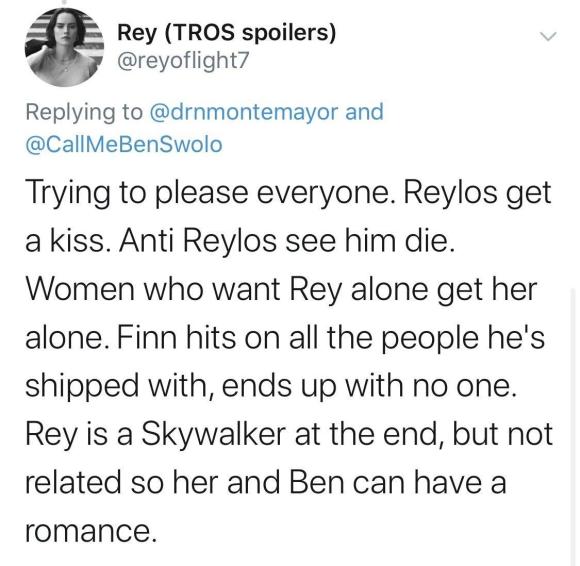 JJ Abrams really just pandered to everyone and to no one – I get that TLJ’s reception was terrible and Disney really tried to reel it in, but have a vision JJ!!!!!! Aspire for more than just correcting all the mistakes before, and copying the original trilogy.

With all that said – I am in no way a movie maker, so I can only approximate how tough it actually is – especially with Disney on your back – to do good by these characters when this movie isn’t so much a movie for enjoyment but more an investment to create more merch to sell.

But so much potential, so much wasted.

TROS is a good movie, a beautiful and well choreographed and well acted one. But it’s also flawed. And yes, the movies are meant to be watched and just enjoyed, but there are some things that set a precedent for future movies. That’s why it’s such a big thing now to include POCs, include women, include LGBTQ.